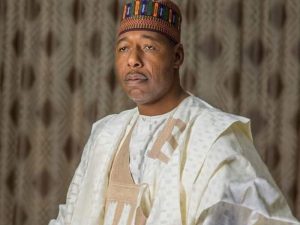 The Borno State Government on Tuesday noted that convoy of the state Governor, Babagana Zulum was not involved in an accident.

The development was disclosed by the Borno State Governor’s spokesman, Isa Gusau while reacting to a fatal auto crash on Tuesday.

Gusau confirmed the death of Mai Kanuribe (King of Kanuri) of Lagos, Mustapha Muhammad, and two others who died along Maiduguri-Mafa road.

He noted that Mai travelled to Mafa in solidarity with the Zulum administration and the All Progressives Congress (APC).

“However, the Mai left Mafa on his way back to Maiduguri, while the governor was still in Mafa. The governor, Senator Kashim Shettima and some leaders came across the accident on way back from Mafa.”

“As expected, the governor and those accompanying him, followed bodies of the Mai, and others, to their families in Maiduguri, empathized with the bereaved families and took part in funerals.”

Gusau said Zulum recognizes the fact that the late Mai, whom he described as a leader with an open passion for the progress of Borno and its people, undertook his last journey to Mafa, in his honour and that of the party.

“The Governor very deeply shares the grief of Mai’s bereaved family, and families of those who died with him. Zulum mourns with them”.

Zulum prayed that Allah forgives the shortcomings of the Mai, other victims and admit them into Aljanna Firdaus.

Naija News had earlier reported that two persons have been feared dead in an accident involving the convoy of Governor Babagana Zulum of Borno State.

It was gathered that the accident occurred in the early hours of Tuesday while the governor was going back to Maiduguri.