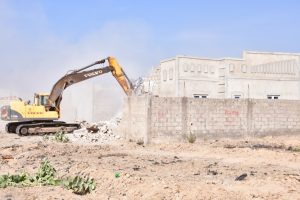 The Borno State government has demolished 1,330 houses built along river banks in Maiduguri, to avoid floods.

During the demolition on Damboa Road, Governor Babagana Zulum said there were a lot of risks in living too close to a river apart from floods.

“People are building on waterways and if nothing is done there will be flooding in the state capital, Maiduguri during the rainy season,” he said.

Zulum said “since last year” people whose homes were demolished have been told to stop construction or vacate.

He said all efforts by the government to persuade residents to stop building in unauthorized areas “were unsuccessful so we came this morning to demolish all illegal buildings.”

BOGIS Secretary-General, Engineer Adam Bababe, who confirmed the demolition of 1,330 houses along the river, said the project was carried out to avoid the threat of floods during the monsoon season.