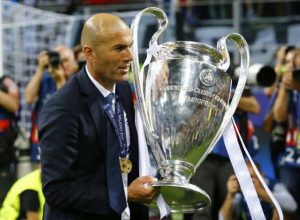 Real Madrid boss Zinedine Zidane has beaten Jurgen Klopp and Pep Guardiola to be crowned the best manager in the world.

Naija News Understands that the 48-year-old won a La Liga title, three Champions Leagues, two UEFA Super Cups, two Club World Cups and a Spanish Super Cup during his first spell at Real Madrid before he left the club in 2018.

He was re-appointed within just ten months, however, and has gone on to win another La Liga title and Super Cup this season to continue his impressive record with Madrid.

The  French newspaper L’Equipe, who gave the award stated that Zidane is a coach who has experienced only one club, and quite rarely defeat.

“A coach who did what none of his predecessors did, win three Champions Leagues in a row (2016, 2017, 2018), who was able to return to the footsteps of his own glory and question everything to become a new Spanish champions with Real Madrid last month.