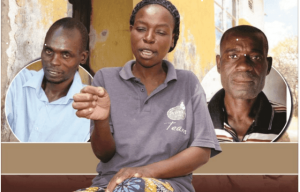 A Zimbabwean woman has been asked to pay the sum of $5000 as a fine and to secure her bail after she was caught for possessing two marriage certificates.

Naija News understands that Moreblesing Maridza got married to another man to satisfy her sexual pleasure while her marriage with her husband, Platinum Park in Zvishavane is yet to be dissolved.

It was reported that the 41-year-old woman accused her first husband of failing to have sexual intercourse with her in the past 12 years and as she couldn’t hold it any longer, she decided to marry another man.

However, Maridza was arraigned before a court in Zimbabwe and was sentenced to six months in prison thereafter, Naija News learnt. Three months after she was sentenced, Maridza was granted bail on condition that she pays a fine of $5 000 and the other three suspended on condition of she not committing a similar offence in the next five years.

Speaking before the court on charges of bigamy which she pleaded guilty to, Maridza told the court that her first husband, Mr James Chivandire had become mentally challenged and could no longer satisfy her sexual pleasure, a development which prompted her to marry the other man.

Findings revealed that Mr Chivandire had felled and suffered from mental illness in 2000. In 2012, Maridza who got tired of the situation went on to marry a second husband, David Mhuru.

The matter was brought to the public notice in September 2020 when an officer at the Registrar-General’s office observed that Maridza had two valid marriage certificates, Naija News understands.

Meanwhile, one Ifeanyinwa Angbo has cried out over repeated assault by her husband, Pius Angbo, a Channels Television reporter, Naija News reports.