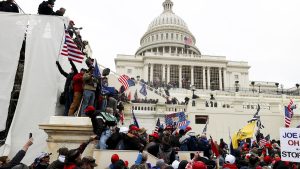 A yet-to-be-identified woman who was shot during the riot that erupted Wednesday afternoon at the United States Capitol has been pronounced dead.

This was confirmed in a live interview with CNN by a spokesperson for the Metropolitan Police Department, Dustin Sternbeck.

“Yes, the adult female that was shot inside of the Capitol was pronounced at an area hospital. Additional details will be forthcoming as this remains an active MPD investigation,” Sternbeck added.

President of the United States of America, Donald Trump, had told his supporters outside the White House that he would never concede defeat in the November 3 presidential election, calling on his supporters to march to Capitol Hill and protest congress affirmation of the US election.

Recall that the Republican was defeated in the election by the presidential candidate of the Democratic Party, Joe Biden, but has insisted the polls were rigged.

The US House and Senate were forced into emergency recess on Wednesday after the protesters breached security cordons and also clashed with security agents.

The US Capitol building has gone into lockdown and curfew has been declared by the Mayor of DC.