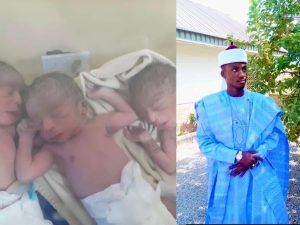 Two days after her husband, Alaramma Abubakar Muhammad Adam was abducted by unknown gunmen in Kaduna State, a woman has reportedly given birth to triplets.

Naija News understands that the young cleric and architect was kidnapped while returning from Gombe to Kaduna on Sunday, December 6 after his engagement in a Qur’an recitation competition.

However, while still in the custody of his abductors, Adam’s wife delivered the set of triplets who are said to be doing well as at the time the report was given. The development was brought to a public notice on Monday evening December 7 by a Personal Assistant to the Speaker of the Kaduna State House of Assembly and Auditor General of APC in Rigachikun Ward, Al’ameen Muhammad Sameen, via his social media page.

Naija News learnt that newly born babies are all male in gender.

Sharing the details on his Facebook page, Sameen wrote: “God is great, there is moon and moon!!! Alhamdulillah, I just received the news of my sister’s daughter that kidnapped people Alaramma Arc Abubakar Muhammad has given birth to three sons, all of them are healthy, we hope Allahu Subhanahu Wata ‘ alah May God protect the children from these wicked people. Amen. Amen. Please continue to pray for us”.

Meanwhile, a Zimbabwean woman who married two men to satisfy her sexual urge has been asked to pay the sum of $5000 as a fine and to secure her bail after spending three months in detention.