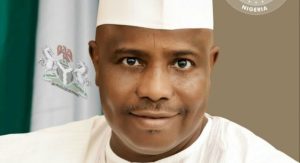 The chairman of the Tambuwal Save Nigeria (TSN), Alhaji MD Yusuf, has said that they are pursuing Sokoto State Governor Aminu Waziri Tambuwal to run for the presidency in 2023 because of his good leadership since entering politics.

Alhaji MD Yusuf made the remarks while addressing newsmen in Kaduna, saying the national development projects undertaken by Governor Aminu Tambuwal date back to 2003 when he went to the House of Representatives and chaired its committees. many successes, including his tenure as Speaker from 2011 to 2015.

He said after Aminu Tambuwal became the governor of Sokoto State, he brought about a revolution in the education sector in the state by giving priority to education, with the sector receiving almost a quarter of the state’s annual budget.

He also established the Education Development Foundation under the Sultan of Sokoto, Alhaji Muhammadu Sa’ad Abubakar, to further strengthen education, saying it was the first of its kind in the history of the state.

He said Governor Tambuwal’s efforts had led to an influx of children, who had previously been out of school, as confirmed by the United Nations Children’s Fund (UNICEF).

“And the state is among the first to pay parents who enrol their daughters in primary schools, to strengthen girls’ education,” he said.

The president said the Tambuwal government had also set aside N7.5 billion for scholarships for students, in addition to several school building projects.

He said in the health sector, the Tambuwal government was constructing a Teaching Hospital at the Sokoto State University, which was expected to be completed in 26 months and hundreds of indigenous labourers had been recruited for the project and most of the building materials were sourced from state and Zamfara and Kebbi states.

Alhaji MD Yusuf said the state government was constructing specialist hospitals in the three senatorial zones of the state, the College of Midwifery in Tambuwal and the Health Center in Farfaru.

The president said the road works that Governor Tambuwal had done or was doing in the state could not be counted, citing the construction across the state.

“On the security front, Governor Tambuwal is working to curb the menace of militants and kidnappers in the state,” he said.

He said almost every aspect of the governor’s performance had made him a successor, adding that “Governor Aminu Tambuwal has been shortlisted for the prestigious Nigerian Television Awards for the advancement of his people. among the 36 governors of the country, ”he said.