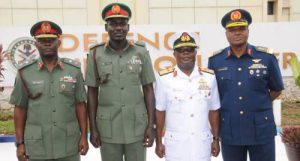 The presidency on Thursday gave a hint as to why President Muhammadu Buhari for a long time, refused to sack the nation’s service chiefs despite calls from many quarters.

While there had been calls from various stakeholders for the President to remove the service chiefs and replace them with new hands, Buhari largely ignored the appeals until suddenly on Tuesday, 26th January, 2021 he appointed new service chiefs for the nation after the previous ones were relieved of their duties.

They were then replaced with Maj Gen LEO Irabor as the Chief of Defence Staff (CDS), Maj Gen I Attahiru as Chief of Army Staff (COAS), Rear Admiral A Z Gambo as Chief of Naval Staff (CNS), and AVM I O Amao as Chief of Air Staff (CAS).

An article by the special adviser to the president on media and publicity, Femi Adesina on Thursday, however, shed more light on why Buhari decided to keep the service chiefs in office for so long despite many calls and clamour for their removal.

The presidential media aide in an article titled ‘ex-service chiefs as ambassadors and why not,” hinted that Buhari wanted them to go home as heroes so he gave them longer time.

He wrote: “The President would have wanted those Service Chiefs to go home as heroes. So he gave them time. Longer than was usual. And having realized that they had fought the war with all that was in them, he decided on some kind of reward, show of appreciation. Admirable. A display of good heart. No matter who you are; a President, a billionaire, Archbishop, Imam, if you don’t have a good heart, forget it. You should be avoided. Like a plague.”

He also added that contrary to popular opinion, the outgone service chiefs didn’t fail in their duties but rather gave bloodied noses to Boko Haram and other insurgents.

Adesina noted that “They claim the Service Chiefs failed. And these critics are people who will miss target if they attempt to fire catapult at an elephant. Poor marksmen! Where was the country in terms of insurgency when their party was given the left leg of fellowship in 2015? Almost 20 local government areas under full Boko Haram occupation. By full, we mean they had planted the flags of their so-called caliphate in those places. Insurgents sat on the stools of emirs, as the latter had fled for dear lives. Roads, schools, markets, NYSC orientation camps had been shut, as Boko Haram was the law in those places. They were collecting taxes and tolls, and running the local government offices. That was what that political party bequeathed to its successor, and to Nigerians.”

“But in came Gen Gabriel Olonisakin, Chief of Defence Staff, Lt Gen Tukur Buratai, Chief of Army Staff, Vice Admiral Ibok-Ete Ibas, Chief of Naval Staff, and Air Marshal Saddique Abubakar, Chief of Air Staff, and they gave the insurgents bloody noses. Drove them out of places they occupied, even went after them into their spiritual headquarters, Camp Zero, in Sambisa Forest, and took it from them.”

“The Service Chiefs did not make a clinical end of insurgency, banditry, and other criminalities in the country. But not for lack of trying. They did their level best, made huge advances, but the times were very difficult. Did they fail as in FAIL? Only in the eyes of those who appreciate nothing, and don’t even know what success is.”

Meanwhile, the presidency on Thursday declared that President Muhammadu Buhari appointed the immediate past service chiefs as non-career ambassadors as a reward for their service and loyalty.