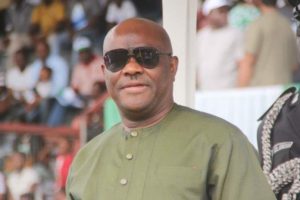 The Governor of Rivers State, Nyesom Wike has noted that the Peoples Democratic Party (PDP) victory in the Edo State governorship election means the entire South-South region can now speak with one voice.

This he noted is due to the fact that all the states are now controlled by PDP with Governor Godwin Obaseki’s victory in Saturday’s governorship poll.

Wike, Chairman of the PDP National Campaign Council for the Edo State Governorship election stated this while reacting to the victory of Obaseki, the party’s candidate at Saturday’s election.

In a series of tweets on Sunday, he also appreciated the people of Edo State for ending godfatherism by voting for PDP and Obaseki.

Governor Wike also commended the Independent National Electoral Commission, INEC, as well as security operatives for ensuring a free and fair election in the state and also the police for providing security.

Wike tweeted: “The conduct of INEC and the Police showed that they were ready to correct the mistakes of the past.

“I commend the people of Edo State for ending godfatherism with the re-election of Governor Godwin Obaseki.

“With the re-election of Governor Obaseki, the entire South-South Region is now completely PDP.

“What this means is that the entire South-South can now speak with one voice on issues concerning us.

“I thank the people of the State for their prayers that led to the Edo State victory.”

Meanwhile, Naija News earlier reported that Wike was treated to a heroic welcome at the airport by the people of Rivers State after leading his party to victory in the governorship election in Edo State.