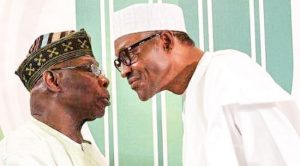 A former President of Nigeria, Olusegun Obasanjo, has commended President Muhammadu Buhari for his #EndSARS speech which was broadcast yesterday.

Naija News had reported earlier that soldiers of the Nigerian Army invaded a peaceful protest at Lekki toll gate on Tuesday evening, October 20, killing #EndSARS protesters in the process.

During the speech, President Buhari failed to address the shooting of #EndSARS protesters by soldiers of the Nigerian Army but rather ordered that the protests against police brutality that rocked various cities across the nation before the Lekki massacre on Tuesday.

President Buhari said: “I, therefore, call on our youths to discontinue the street protests and constructively engage government in finding solutions.

“Your voice has been heard loud and clear and we are responding.”

Reacting to the President’s speech during a closed-door meeting with the President and other former heads of state namely; Ibrahim Badamosi Babangida, Ernest Shonekan, Yakubu Gowon, and Goodluck Jonathan, Obasanjo hailed President Buhari despite backlashes from Nigerians over the speech.

The former President said: ”I commend the speech of last night. The nation had been waiting. You made points that I believe need to be commended. Peaceful demonstration is part of democratic practice.”

“The demands of the genuine protesters were accepted, and you are working on implementation. We commend you,” he said.