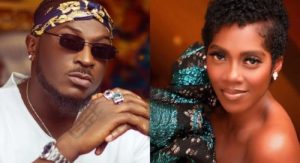 Nigerian singers and songwriters, Tobechukwu Victor Okoh, better known as Peruzzi and Tiwa Savage sparked up their studio session on Thursday morning with some vibes.

Tiwa who was holding in her hand a studio mic made a slur and Peruzzi, on the other hand, spices it with a dramatic display which made them all burst into laughter.

Watch the short clip below;

Meanwhile, Lara Omotayo, wife of Peter Okoye of the defunct P-square music group, has asked her husband and his twin brother, Paul Okoye to settle their differences, Naija News reports.