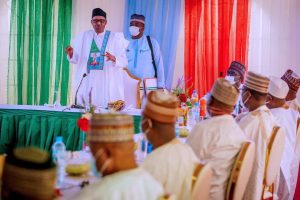 President Muhammadu Buhari has assured Nigerians that his administration will always operate an open-door policy in its operations.

Buhari said this on Saturday in Daura when he promised that the 2021 budget will be implemented with all transparency and openness.

The President who spoke to newsmen after re-validating his All Progressives Congress (APC) membership status, said the balance sheet on how the 2021 budget will be executed including money received and how it was spent will be made available to the National Assembly and Nigerians.

He also appreciated the federal lawmakers for the effective and detailed consideration given to the budget figures before the passage.

“We have directed all the Ministries, Departments and Agencies to follow what is in the budget so that we can get the National Assembly to easily support the next budget. We can tell them what we have received, and how it was spent.

“We are always ready to make the balance sheet available for all Nigerians and the National Assembly. We have nothing to hide.’’

He noted the commitment of his administration to agricultural development in order to diversify the nation’s economy.

As earlier reported by Naija News, the President’s registration exercise in Daura was attended by the Senate President, Ahmad Lawan, former Senate President, Ken Nnamani, ten governors, including the Governor of Yobe State, Mai Mala Buni, who is the Chairman of the APC Caretaker Committee, and other party stalwarts.

The immediate past ADC, Abubakar, vacated the position to resume a promotion course, after which he would be promoted to the Brigadier-General rank.

A source in the Villa told The Nation that Dodo has been appointed as the new Aide-de-Camp to the President with immediate effect.

“It’s true, the President’s ADC is going for a course, he’s due for the rank of Brigadier-General. He’s due to leave sometime in February, but a replacement has already been shortlisted”, the source said.