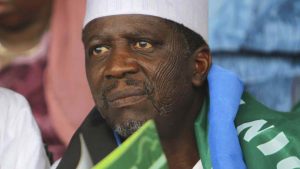 Former Sokoto State Governor, Attahiru Bafarawa, has berated President Muhammadu Buhari led government over his inability to secure the life of citizens from deadly attacks by criminal groups, especially in the North.

The People’s Democratic Party (PDP) chieftain, while speaking in Abuja on Wednesday, January 20 said northern elders are very angry with the president, adding that they will not be silent because their person from the North is in power.

Lamenting on the spate of insecurity in the northern region of the country, Bafarawa said it is unwise that the Nigeria government continued to spend billions on COVID-19 while thousands of people are displaced in the North.

The former governor stated that if the North fails to speak out now, they won’t be able to do so when Southerner becomes president.

“We can’t keep silent because our person from the North is in power. If we don’t speak, when a Southerner becomes president, we won’t have the right to express our feelings,” said Bafarawa.

He noted that threats and acts of armed banditry, cattle rustling, kidnapping and other forms of arson being perpetrated by some persons in the Northern region and Nigeria at large, is taking an unnecessary dimension to the level that no sane society would watch and wrap up everything in the hands of the government.

He continued that: “Thousands of people are displaced in the North and in other parts of the country. Instead of the government to spend N400 billion on COVID-19 vaccines, why can’t we spend it to buy security equipment? Insecurity is our Coronavirus in Nigeria.

“All of us as members of the society should bear it in mind that while the government does what it is supposed to do, we should also be seen to contribute our quota towards achieving the desired goals of ridding our society of these acts of barbarism,” he said.

“We should resolve that we could use any legitimate means through interaction, in the forms of meetings, conferences, and any other means possible to identify areas which border on insecurity issue and reach out to the government or its agencies for the purpose of generating ideas on how best the government could tackle the menace,” Bafarawa reiterated.

In another news, Naija News reported that President Muhammadu Buhari led government has disclosed that exiting N-power beneficiaries who have enjoyed the programme for two years can now access permanent job opportunities.