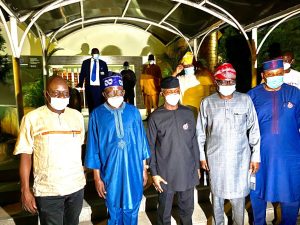 Also at the meeting was Governor Babajide Sanwo-Olu, Lagos APC Chairman, Tunde Balogun, and Abiodun Faleke, a member of the House of Representatives.

The agenda of the meeting could not be ascertained as at press time.

This online news platform recalls that President Muhammadu Buhari’s Chief of Staff, Ibrahim Gambari, on November 8, 2020, led South-West ministers on a sympathy visit to Bola Tinubu, whose properties were damaged during the fallout of the #EndSARS protest, by suspected hoodlums.

Among those who visited are Minister of Works and Housing, Babatunde Fashola; Minister of State, Health, Olorunnimbe Mamora; Minister of Information, Lai Mohammad, and Minister of Youth and Sports Development, Sunday Dare.

Many public properties were massively looted, including Television Continental and The Nation newspaper, both of which have been linked to Tinubu.

Some protesters had also believed that the toll gate plaza where the soldiers shot at them, was owned by Tinubu.

However, the politician denied making money from the plaza, adding that the rumor of his ownership was politically-motivated.