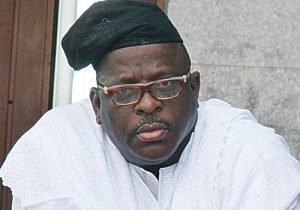 In the video, Senator Kashamu could be seen dropping bundles of freshly minted cash on the singer as he praised him.

All along as the Senator sprayed cash on the singer, he kept a straight face. Senator Kashamu is believed to be one of the dignitaries present at the event.

Naija News obtained the video from the Twitter page of a user with username @walegates and the clip has been generating lots of reactions from Nigerians particularly on his source of wealth and that of other politicians.

Meanwhile, this online medium recalls Kashamu is currently embroiled in a legal tussle with the federal government of Nigeria from extraditing him to the United States of America (USA) on allegations of drug trafficking.