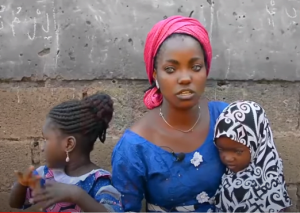 Barely three days after reports emerged that a man in Ilorin, the capital city of Kwara State had rejected his two daughters for having strange eye colors.

The development went viral after a Facebook user, Alabi Rukayat Oyindamola shared some photos of the two young girls, explaining in detail why and how the children were abandoned by their father.

She shared; “Hello! I traveled to Ilorin this Eid period and I saw this small girl she lives around my house (Ilorin). Her name is Kaosara she is 8years of age, she is an indigen, she also has a junior sister Hassanat (Kehinde). her Taiwo is late due to a lack of proper care and rejection from the father because she has special qualities(her blue eyes). Her mother’s name is Risiqot,”

Giving more updates on the nature of the girl’s blue eyeballs, their mother, Risiqot who was recently interviewed by The PUNCH, revealed that she was the only one to have the kind of eyes balls in their family.

According to Risiqot, her mother never for once take her to the hospitals for any treatment on the eyeballs, nor has she done so to her own children since she gave back to them.

Watch the video of Risiqot and her children below been interview;

Meanwhile, a man whose sanity is yet to be confirmed has been knocked out by an angry driver after standing naked for minutes to obstruct heavy traffic.