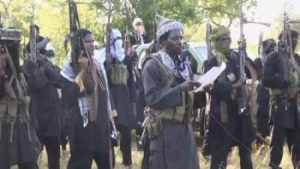 Many of them moved on foot as they approached a military base but Nigerian ground and air forces fought back; their counteroffensive left a number of insurgents dead.

Confirming the success of the operation, an intelligence officer said aircraft were scrambled from Yola and Maiduguri within minutes after ground troops sent the signal.

Amaq released a video showing ISWAP fighters inside of Askira. An FV103 can be seen and it appears to be facing little resistance. Apart from that, dozens of fighters and several vehicles storm the town. This is obviously before NAF did its job. pic.twitter.com/051FldFOY2

Meanwhile, members of the Boko Haram insurgents have allegedly established new bases in some parts of Yobe and Adamawa states, security sources revealed.

According to SaharaReporters, Boko Haram established hideouts in Geidam and some other parts of Yobe State.