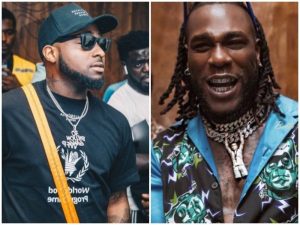 Popular Nigerian musicians Davido and Burna Boy has reportedly engaged in a dirty fight at a nightclub in Ghana, West Africa.

Naija News reports that videos have emerged on the micro-blogging site, Twitter, suggesting that Nigerian singers, fought at the club.

This online news platform understands that the alleged fight between Davido and Burna Boy started when Burna Boy moved to Davido at Twist nightclub in Ghana.

Davido was seen in one of the viral videos, angrily leaving the nightclub, in what appears to be a scene that occurred after he reportedly clashed with Burna Boy.

A Twitter user, La Fille De Dieu (@emilyadusei), who is believed to be an eyewitness when the said fight between Davido and Burna Boy took place, was so angry with the superstars for ruining her night, asking them to go back to Nigeria in a series of tweets narrating the event.

“The messed thing about it was DJ was still playing music while Burna and davido fought.

“Burna moved to davido,” she alleged.