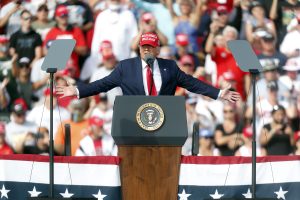 The United States President Donald Trump has claimed that the country’s election process is worse than that of third world countries.

In a post that has been flagged by Twitter on Wednesday, Trump said, “The Republican party and, more importantly, our country, needs the presidency more than ever before – the power of the veto. Stay strong!

“States want to correct their votes, which they now know were based on irregularities and fraud, plus corrupt process never received legislative approval. All Mike Pence has to do is send them back to the States, AND WE WIN. Do it Mike, this is a time for extreme courage!”

They just happened to find 50,000 ballots late last night. The USA is embarrassed by fools. Our Election Process is worse than that of third world countries!

The States want to redo their votes. They found out they voted on a FRAUD. Legislatures never approved. Let them do it. BE STRONG!

Recall that Joe Biden’s Democratic Party won the first of two Georgia run-offs and is in driving seat to win the second hours before Congress was set to certify the president-elect’s victory over Donald Trump.

Trump is mounting pressure on Vice President Mike Pence to reject the outcome of the presidential election in a series of tweets.

If Vice President @Mike_Pence comes through for us, we will win the Presidency. Many States want to decertify the mistake they made in certifying incorrect & even fraudulent numbers in a process NOT approved by their State Legislatures (which it must be). Mike can send it back!

Pence is expected to preside over a joint session of Congress to certify the Electoral College vote that confirmed Biden as the winner of the White House later today at the Capitol Hill.