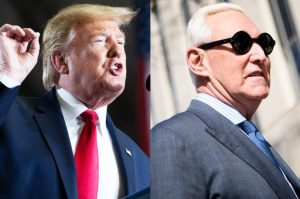 In the wave of the ongoing presidential campaigns,  the United States president, Donald Trump’s top ally Roger Stone has been sentenced to a 40-month jail term.

Naija News understands that Stone was convicted last fall of lying to Congress and threatening a witness regarding his efforts for Trump’s 2016 campaign.

This online media learnt that U.S. District Judge Amy Berman Jackson chastised the president and the nation’s top prosecutor shortly before she sentenced Stone to three years and four months behind bars for crimes committed during the special counsel and congressional investigations of Russian meddling in the 2016 presidential campaign.

Jackson also rejected claims by Trump’s supporters that the prosecution of Stone, a Republican political operative and self-described dirty trickster, was politically inspired to take down one of the president’s associates.  She also added that Stone “lied and sought to impede production of information not to some secret anti-Trump cabal but to Congress,” which she noted was in Republican control at the time.

However, Trump, while reacting to the 40-month jail term on Thursday at a law enforcement event in Las Vegas, assailed the jury forewoman in Stone’s trial for her “horrible social media account” and hinted that he might pardon his friend. “Because I’d love to see Roger exonerated. I personally think he was treated very unfairly,” he said.

Trump has alleged “significant bias” from the forewoman, who praised the prosecutors’ integrity on Facebook after they quit the case last week.