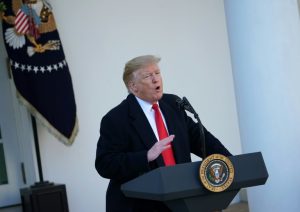 The President of the United States, Donald Trump has appealed to his supporters to remain calm and peaceful following the break out of violent protests on Wednesday.

Supporters of the US President had on Wednesday, stormed the capitol building in Washington DC and after a clash with police, marched against the building in an attempt to stop the confirmation of Joe Biden as the duly elected president of the United States.

As earlier reported by Naija News, President Trump, on Tuesday, told his supporters outside the White House that he would never concede defeat in the November 3, presidential election.

The pro-Trump protests led to the declaration of a curfew on Washington DC, capital of the United States of America by the mayor of the city Muriel Bowser on Wednesday.

The curfew was declared following the violent protest by some supporters of outgoing president Donald Trump.

The Mayor in a tweeted statement following the breakdown of disturbances announced that Washington heads into curfew beginning from 6:00pm tonight (Wednesday).

The statement noted that the curfew will be in place till 6:00pm on Thursday, January 7.

“During the hours of the curfew, no person, other than persons designated by the Mayor, shall walk, bike, run, loiter, stand, or motor by car or other mode of transport” within the district, the statement said.

Reacting to the action of his supporters, President Trump has called for them to end the violence and stay peaceful.

Taking to his Twitter account after the protesters got violent, the American President wrote: “I am asking for everyone at the U.S. Capitol to remain peaceful. No violence! Remember, WE are the Party of Law & Order – respect the Law and our great men and women in Blue. Thank you!”

He also tweeted: “Please support our Capitol Police and Law Enforcement. They are truly on the side of our Country. Stay peaceful!”

I am asking for everyone at the U.S. Capitol to remain peaceful. No violence! Remember, WE are the Party of Law & Order – respect the Law and our great men and women in Blue. Thank you!

Meanwhile, the Vice President of the United States of America, Mike Pence, on Wednesday said he will not stop the certification by Congress of Democrat Joe Biden’s election victory.

Pence said in a statement released as a joint session of Congress began to certify the Electoral College votes from the November 3 election.

He said, “The Constitution constrains me from claiming unilateral authority to determine which electoral votes should be counted and which should not.”