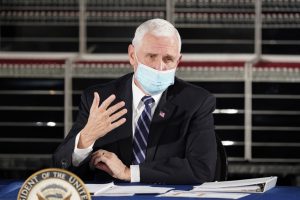 The Vice President of the United States of America, Mike Pence, on Wednesday said he will not stop the certification by Congress of Democrat Joe Biden’s election victory.

Pence said in a statement released as a joint session of Congress began to certify the Electoral College votes from the November 3 election.

He said, “The Constitution constrains me from claiming unilateral authority to determine which electoral votes should be counted and which should not.”

This is coming after Trump urged Pence at a rally in Washington to decline to certify the Electoral College results.

Naija News had earlier reported that Trump on Tuesday, told his supporters outside the White House that he would never concede defeat in the November 3, presidential election.

Recall that the Republican was defeated in the election by the presidential candidate of the Democratic Party, Joe Biden.