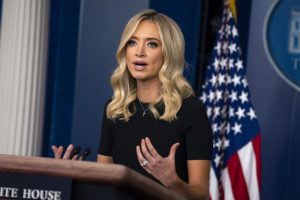 The Press Secretary of the White House, Kayleigh McEnany, on Monday disclosed that the legal suit against the presidential candidate of the Democratic Party, Joe Biden is only the beginning.

McEnany while speaking a press conference said, “This election is not over. Far from it.”

She claimed that the electoral process was rocked by fraud, irregularities and shenanigans as claimed by President Donald Trump.

She called on reporters to help investigate the allegations of electoral corruption.

She said, “We have only begun the process of obtaining an accurate, honest vote count.”

She claimed that election officials in the key battleground states had allowed “a disproportionate number of Democrats to correct, or cure, inaccurately filled-out ballots.”

The Chairwoman of the Republican Party’s National Committee (RNC) Ronna McDaniel, also said the party had collected 131 affidavits, or signed legal statements under oath, in Michigan as part of their investigation into alleged election irregularities.

She said, “If the shoe were on the other foot…, “if it were this close the other way, if President Trump was in the lead in all these states, and the media would be screaming. This isn’t over.”