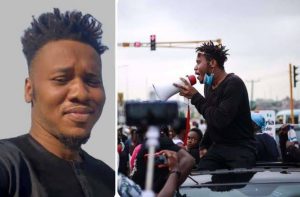 Eromosele Adene, one of the #EndSARS protesters may spend an extra 30 days in police custody, despite agitations for his release.

It was learnt that the Eromosele was brought back to Lagos, after initially moving him to Abuja for interrogation.

However, the police secretly approached Magistrate O.A Salau, without the consent of his lawyer and applied for a remand order to detain him for an extra 30 days.

Mr. Tunde Jinadu, Eromosele’s lawyer who was present at the SCID was told by policemen that his client was no longer in custody.

However, he was notified by concerned persons about what the police were up to.

He said; “We were not served. We were not called that he was being brought to SCID. An ACP told me they didn’t know where he was. This sharp practice of the police needs to stop. They just wanted to shut us out. That was how they flew him to Abuja last week without my knowledge.

“Luckily, some good people informed me that he (Eromosele) had been taken to a magistrate court. Thank God I have a car. I was able to quickly arrive at the court.”

It was learnt that when the policemen arrived the court, they were surprised and wondered how the lawyer was able to get information on what was happening.

Jinadu added; “The police asked the magistrate for an order to remand him for 30 days despite the fact that he had already spent 12 days in their custody.

“We tendered a medical report from Eko Hospital as regards the liver complication and immune system and we made an oral application for bail.  And we notified the magistrate that he (Eromosele) had been moved from one detention facility to the other and one state to the other.”

The magistrate subsequently fixed the ruling for Tuesday November 17.