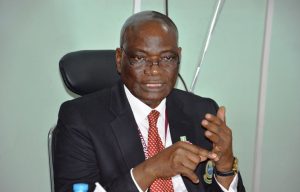 The Vice-Chancellor of the University of Lagos, Professor Oluwatoyin Ogundipe has reacted to reports that he was sacked by the Governing Council of the institution on Wednesday.

In a  statement, signed  personally signed by Ogundipe, He urged the general public to disgregard the notice of termination signed by the council’s Secretary, Oladejo Azeez.

Ogundipe described the allegations as untrue and a figment of his imagination. T

Meanwhile, UNILAG’s Senate Representative in the Governing Council, Prof Olukemi Odukoya has accused the Pro-Chancellor and Chairman of the Council, Wale Babalakin of “actualising his machinery” to remove Ogundipe as VC. 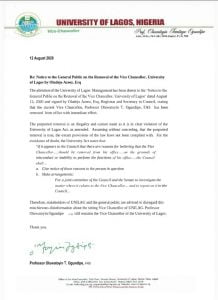