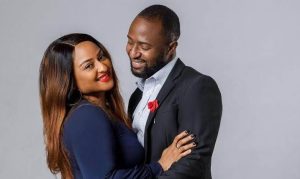 The winner of Ultimate love, a reality tv show, Kachi, has disclosed why his relationship with Rosie ended.

The reality show stars were the winners of the dating show, ‘Ultimate love’.

The relationship of Kachi and Rosie, however, ended weeks after rumours emerge on the internet.

Kachi during an interview with Chude disclosed that he ended the relationship with Rosie because she aborted his baby without his approval.

The reality tv star added that he warned Rosie about the abortion, stressing that he would not be part of the process but she went ahead with it.

“She said she didn’t want her parents finding out she was pregnant before they got married especially after she had two children out of wedlock.”

“Rosie also brought up her career but insisted her parent was the major reason she wanted to terminate the pregnancy.”

“Then we set out looking for a particular drug but within me I said if it’s Gods will that we keep this child let us not find the drugs,” he added.