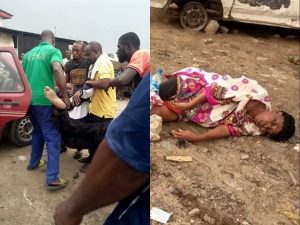 Residents of Eleme junction in Rivers State have been left in confusion as two old aged persons slumped and died at close range.

Reports reaching Naija News at this time confirmed that the two individuals, a male and a female slumped after alighting from a commercial vehicle at the Eleme Refinery junction.

The two occurrences which are considered strange happened on Wednesday morning, January 6, 2020.

Naija News learnt that the son of the man arrived at the scene of the incident immediately he was contacted through his telephone. However, no one had come to identify the body of the dead woman even hours after the incident.

On the other hand, the boy who responded to the death of his father told newsmen that the deceased was at Eleme to withdraw money at a bank.

In another news, Naija News reported that former presidential aide, Reno Omokri, has shared on his Twitter account the conversation he had with Aisha Mercy Yakubu, the owner of the alleged Kaduna sex party hotel.