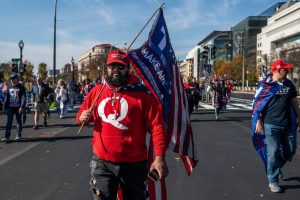 Twitter announced Monday that he had “permanently suspended” 70,000 accounts affiliated with the pro-Trump QAnon movement since Friday, to prevent them from using the social network for violent purposes such as the riots in Washington last week.

The platform undertook a purge that began Friday with the final blocking of the account of the US president, accused of having encouraged his supporters to disrupt the certification of the victory of Democrat Joe Biden by Congress.

“These accounts were engaged in sharing harmful QAnon-associated content at scale and were primarily dedicated to the propagation of this conspiracy theory across the service,” Twitter said in a statement.

The number of suspended accounts is high because many individuals had more than one.

Most major platforms have taken unprecedented action since supporters of the billionaire Republican stormed the Capitol for several hours on Wednesday, shocking the country and tarnishing its image internationally.

Facebook and Twitter, in particular, have indefinitely suspended the account of Donald Trump, who has not stopped for months discrediting the electoral process, and accusing Democrats without proof of having “stolen the election” from him.