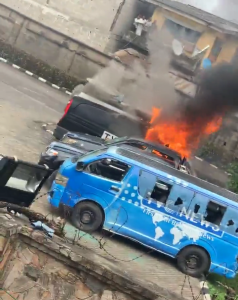 Television Continental is back on air after it was attacked by suspected hoodlums on Wednesday morning.

Recall that the host of popular ladies show ‘Your View’, Morayo Afolabi-Brown, had confirmed during the show on Wednesday that hoodlums had entered the premises of TVC.

The hoodlums had attacked the Tv station few hours innocent protesters were killed at the Lekki toll gate by security operatives on Tuesday night.

The attackers were spotted on videos destroying vehicles on TVC premises and thereafter set fire on the vehicles and the building.

There were speculations that the TV station was attacked because of its link to the National Leader of the All Progressives Congress, Bola Tinubu.

Workers of the TV station were rescue by Men of the Police Rapid Response Squad who were in the compound to offer protection.