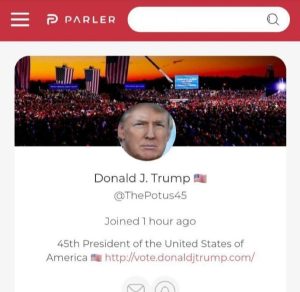 Within an hour after he joined Parler, Trump had 2.4 million followers and continued to share his opinion on the violence that rocked the Capitol Hill.

Naija News reports that Parler was launched in August 2018 and prides itself as “the world’s premier free speech platform” focused on protecting user’s rights.

“Speak freely and express yourself openly, without fear of being ‘deplatformed’ for your views. Engage with real people, not bots. Parler is people and privacy-focused, and gives you the tools you need to curate your Parler experience,” information on the landing page of the website reads.

Reacting in a statement on Facebook, Mark Zuckerberg said for years Facebook and Instagram had allowed Trump to use the platform to say all sorts but this time, it was time to implement desperate measures since it had become obvious that Trump was instigating violence.

He said: “Following the certification of the election results by Congress, the priority for the whole country must now be to ensure that the remaining 13 days and the days after inauguration pass peacefully and in accordance with established democratic norms.

“Over the last several years, we have allowed President Trump to use our platform consistent with our own rules, at times removing content or labelling his posts when they violate our policies.

“We did this because we believe that the public has a right to the broadest possible access to political speech, even controversial speech. But the current context is now fundamentally different, involving use of our platform to incite violent insurrection against a democratically elected government.

“We believe the risks of allowing the President to continue to use our service during this period are simply too great. Therefore, we are extending the block we have placed on his Facebook and Instagram accounts indefinitely and for at least the next two weeks until the peaceful transition of power is complete.”