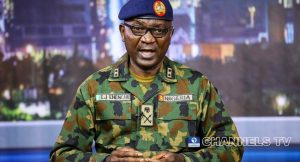 The Defence Headquarters, DHQ, on Thursday, noted that sixty-four insurgents were killed during an encounter with troops in Yobe State.

The spokesman of DHQ, Maj. Gen. John Enenche, disclosed that the insurgents were killed at Gujba Local Government Area of the state and Gonan Kaji village along Damaturu-Buni Yadi Road during firefights with the troops.

Enenche while speaking with newsmen about security operations across Nigeria between January 7-13, 2020, said firearms, ammunition and 10 gun trucks were also recovered from the terrorists.

He stated, “During the encounter with the troops of Operation Tura Takai Bango at Gujba on January 9, 28 terrorists were neutralized and several others escaped with gunshot wounds, while one gun truck and several arms and ammunition were recovered.”

“Similarly on the same day, troops had an encounter with some Boko Haram/ISWAP terrorists at Gonan Kaji village along Damaturu-Buni Yadi road in Yobe State, during which 30 terrorists were killed while caches of arms and ammunition were recovered by troops.”

He further stated that the troops encountered some insurgents at Kafa village in Damboa LGA and six terrorists were neutralized while a gun truck and several weapons were destroyed.

He added they the troops of Operation Lafiya Dole also dealt with some militants at their enclaves between Goniri and Gorgi in Gujba and Damaturu Local Government Areas of Yobe and Borno States.

He noted that the attack saw several terrorists killed while 10 gun trucks were recovered by the troops.

Enenche while speaking on the mission of Operation Delta safe, said  they have continued to fight against criminals in the zone,  he added that the Forward Operating Base Ibaka intercepted two suspects in a large wooden boat laden with 1,184 of 25kg bags of Yaraliva Nitrabor fertilizers suspected to have been smuggled from Cameroon.

Enenche warned against illegal use of fertilizers for sinister purposes by criminal elements in the country.

“Equally, on January 11, Forward Operating Base Ibaka gunboats while on routine patrol around Mbo River intercepted and arrested a medium-size wooden boat laden with 17 drums of 300 litres of products suspected to be PMS with two suspects,” he disclosed.