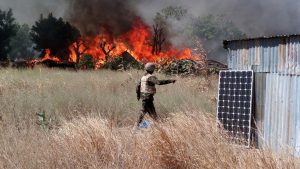 It was gathered that two Customs personnel went missing after a ‘terrifying’ gun duel against Boko Haram by soldiers.

“After foiling the attack, troops pursued the criminals who fled into the bush, before we learnt that two Customs officers were missing,” said a military source.

Gaidam is about 182km from Damaturu, the Yobe state capital.

According to previous reports, Geidam has been attacked four times this year by Boko Haram insurgents.

The group has caused over 30,000 deaths and displaced millions of individuals, mainly in Adamawa, Borno and Yobe states.

The terror group wants an Islamic caliphate in northern Nigeria.