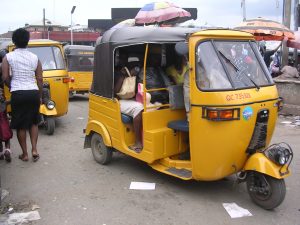 One Suleman Adekola has been found lifeless a the football field around Abaranje, in Ikotun area of Lagos State.

Reports had it that the deceased drove his tricycle to the centre of the football pitch and consumed a portion of a local insecticide to kill himself.

When interviewed on the sad development, the wife of the 45-year-old man, Nike Adekola, said she is still in shock on why her husband killed himself. Speaking on the situation she found herself after the incident, Nike said her two children had stopped schooling because of their father’s demise.

She said, “Everything is still confusing to me. I saw his dead body. I also saw the bottle of the insecticide he consumed. He drank half of the content of the bottle, covered the remaining and dropped it. I don’t know why he took his life.

“We have two children who have stopped schooling after he died; people who have been paying us condolence visits are the ones giving us money to feed. We want Nigerians to come to our aid.”

Reacting to the incident, one of the deceased’s friend, Mutiu Olayiwola, who spoke to PUNCH Metro, said people alerted the police after the corpse was found.

He said Adekola’s colleagues after learning of the incident rushed to the football pitch and confirmed that he was attached to their park.

He said, “We have been friends for over 28 years. I was at home when I received a call from his colleagues that he had committed suicide. How his colleagues got to know was that when people saw his body inside his tricycle parked on the football pitch, they went to the tricycle operators’ park to inform them that one of their colleagues had died.

“It is surprising that he committed suicide. He never complained that he was going through any challenges. In fact, one of our brothers saw him around 5 pm on that day and they had a brief chat; he never complained of anything and that is why we are surprised.”

The state Police Public Relations Officer, CSP Muyiwa Adejobi, who confirmed the incident to reporters said no mark of violence was found on Adekola’s body.

“On January 18, 2021, around 11.31 pm, one Abdullahi Ajayi, came to the station and reported that he received a call that one Suleman Adekola, 45, committed suicide by taking an insecticide while sitting in a tricycle near a football field along Abaranje Road in Ikotun. We visited the scene of the incident and observed no mark of violence on his body. An investigation is in progress,” Adejobi said.

In another news, Edo State Governor, Godwin Obaseki has described the late Tony Momoh as a great son of Edo who was totally Nigerian.

Obaseki said this in a statement on Monday evening in which he reacted to the death of Momoh, a former Minister of Information and Culture in Nigeria, Naija News reports.