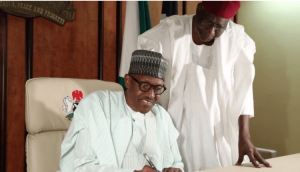 Not many Nigerians knew who the man Abba Kyari was, at least not until he was appointed the Chief of Staff by President Muhammadu Buhari after he emerged Nigeria’s democratically elected president in 2015.

The man Kyari represents different things to different people but going by the definition of roles, nothing gets to the president without going through his Chief of Staff personally or his office, hence Kyari became a sought after bride by politicians, diplomats, government officials and the countless number of people that daily and constantly seek an audience with the President.

Some years down the line of the administration President Buhari, tongues started wagging and rumours began to spread suggesting that a certain ‘cabal’ was influencing the activities of the president’s administration. Though the members of the supposed cabal remain faceless, and its very existence constantly denied by the presidency, the tag and belief has refused to go away and the proponents of a cabal existing within the Buhari administration have identified no other person than Abba Kyari as the strongest and head of the said cabal while other members remain unknown.

Nigeria’s first lady and wife of the President, Mrs. Aisha Buhari further raised suspicion on the cabals when she alleged publicly and openly in December 2018 that some people within her husband’s administration have hijacked the activities of her husband.

The President’s wife also said some politicians have formed the habit of going to these two men in the night to beg for favours.

However, she never revealed the identities of these men.

It was therefore not a surprise on 24th March, 2020 when the news was made public that Abba Kyari tested positive to coronavirus (COVID-19) infection after his return from the Germany trip where he met with officials of Siemens in Munich on the Nigerian electricity expansion programme, the social media went into a frenzy and given the closeness between Kyari and Buhari, many automatically assumed the President will also test positive.

But when the President’s official test result was delivered by the Nigeria Center for Disease Control (NCDC), Buhari tested negative.

Few days down the line, particularly, on Thursday, 2nd April 2020, controversial Nigerian journalist, Kemi Olunloyo dropped a hint on Twitter that a prominent and high ranking member of the Buhari administration had died from the coronavirus complications, many automatically believed it was Kyari. The report didn’t turn out to be true.

There were even rumours that President Buhari had sacked Kyari as his Chief of Staff due to the illness and replaced him with former Oyo State governor, Abiola Ajimobi, another rumour which turned out to be ‘fake news.’

Kyari has turned out to be the proverbial cat with many lives even as the presidency confirmed that Kyari was not dead, neither was he sacked as the president’s Chief of Staff but he is in isolation in Lagos State where he is receiving treatment and recovering from the COVID-19 infection.

Kyari has so far become a man many love to hate and hate to love but the man, who rarely speaks and his voice rarely heard, is now widely known and feared in the political quarters and he remains an enigma many are trying to understand.

All through this, Abba Kyari remains a trusted right-hand man of President Muhammadu Buhari and the two are expected to retire to their home countries when the President concludes his tenure in 2023.

This time however, their lives can be free from public scrutiny. Till then, Kyari remains a man after Buhari’s heart.