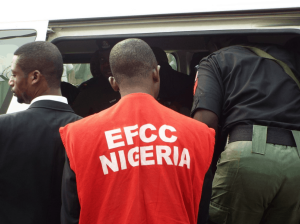 The Economic and Financial Crimes Commission (EFCC) has described the latest ranking of Nigeria by the Transparency International Corruption perceptions Index as baseless and biased.

In the latest release, Nigeria was ranked as the most corrupt country in West Africa.

Reacting in a statement by its spokesperson, Tony Orilade, the EFCC accused Transparency International of having a hidden agenda against Nigeria.

According to the anti-graft agency, the organisation has been consistent in its biased rating of Nigeria.

EFCC said: “We insist that the rating is a far cry from the evident strides and achievements so far accomplished by the anti-graft agency in the fight against corruption, particularly under the administration of President Muhammadu Buhari.

”The claim is evidently not supported by any empirical data, especially when placed side-by-side with the remarkable achievements of the Commission in the past years.

The EFCC stated that in 2019 the commission secured an unprecedented record of 1,268 convictions, including that of a former state governor and a serving senator.

“Over the past years, billions of naira, millions of dollars and other foreign currencies were recovered from corrupt persons in the country, including securing the forfeiture of assets of their illegal and fraudulent activities,” the EFCC added.