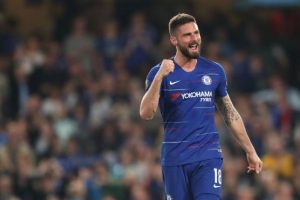 Former Arsenal striker, Olivier Giroud, who has been linked to Inter Milan could be joining Tottenham Hotspur before the end of the January transfer window.

According to Gianluca Di Marzio of Sky Italia, the striker has been offered an 18-month deal by the English Premier League side.

A report has it that Tottenham manager, Jose Mourinho, discussed with Giroud’s representatives as they attempt to sign the France World Cup winner before the transfer window ends on Friday.

Serie A side and Chelsea will battle out for Giroud, Antonio Conte’s side is willing to offer £3.4million but the Blues are requesting for £8.4million.

Giroud who has only appeared in seven matches across all competitions for Chelsea this season current’s contract at Stamford Bridge expires at the end of the season.