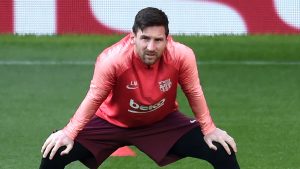 According to reports by ESPN, the French professional football club are keen to bring Messi to Le Parc des Princes stadium since the player told his club he wants to leave.

Naija News understands that there have been no offers at the moment for the striker, but the Ligue 1 champions are ready to hijack the player either as a free agent or for a small fee.

Meanwhile, PSG already has two high earning players; Neymar collecting €32 million yearly and Kylian Mbappe €21m per year. The club, however, feels that it is not impossible to add the Argentine to its squad should a final decision of his exit from Barcelona is announced.

Naija News recalls that Messi had in previous seasons wanted to bring back Neymar to join him at Barcelona but it never worked.

However, Manchester City is said to have topped the lists of favourites to land the 33-year-old, because of Pep Guardiola’s relationship with the player.

In another news, Manchester United goalkeeper, Dean Henderson has signed a new five-year with the club until June 2025, Naija News reports.