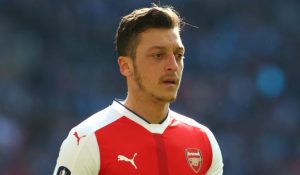 Arsenal playmaker, Mesut Ozil and Fenerbahce have reached an agreement over his transfer to the Turkish club this January.

The 32-year-old will wear the number 23 shirt, dropping the number 10 shirt he wore for the Gunners.

According to UK Mirror, the Turkish club is also planning a special presentation ceremony for German, who could sign his new contract as early as Saturday.

Ozil is leaving the club after months of lack of playing under the leadership of Mikel Arteta.

Ozil has been linked with both DC United and Fenerbahce in recent weeks, but he is eager to return to Turkey.

His legal representatives will now hold negotiations with Arsenal in a bid to terminate his deal and make him a free agent.