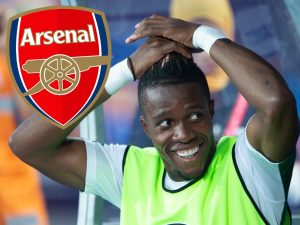 Ivorian international and Crystal Palace winger, Wilfried Zaha has spoken out on the decision of Premier League giants, Arsenal to overlook signing him in 2019.

The player said he thought he was on his way to the Emirates Stadium after speaking with Unai Emery about a move but the Gunners’ management eventually chose Nicolas Pepe whom they signed from Lille over him.

Speaking with Jamie Carragher on The Greatest Games podcast, Zaha wondered why Arsenal snubbed him for Pepe despite the fact that he already had Premier League experience.

“I had a conversation with the manager (Unai Emery), actually.

“He was just like, ‘we don’t need to go through much’. He’s seen me play, he knows I can change games at any time and stuff like that. It was like, ‘yeah, we’d love to have you’.

“The conversation was rather straightforward because I’ve played against him when he’s managed Arsenal, he’s seen what I can do, he’s seen my work rate, what I can add to the team.

“Obviously, it was up to the club who they chose, and obviously they chose Pepe over me,” Zaha said.

Meanwhile, the Versailles Prosecutor’s Office has confirmed that Karim Benzema will be tried for the crime of complicity for having been involved in an alleged blackmail crime against his former teammate, Mathieu Valbuena.

The Real Madrid forward faces a sentence of five years in prison and €750,000 typified by the Penal Code.

As RMC Sport has reported, French criminal law similarly condemns participating indirectly in the crime of blackmail. However, the French international will not go to jail if he is guilty, since according to an expert in French Criminal Law, being the first time he has been tried by a French Court, the sentence could be reduced with a bond that amounts to €750,000.

Currently, Karim Benzema is innocent until a court says otherwise.