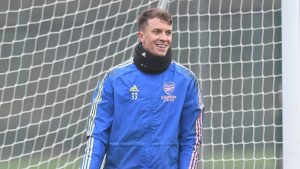 English Premier League side, Arsenal on Friday confirmed that goalkeeper Matt Macey has departed the Emirates Stadium to join Scottish Premiership side, Hibernian.

The 26-year-old joined the Gunners in 2013 from Bristol Rovers but has now put an end to his stay at the London club.

A club statement on the player’s departure reads:

“The 26-year-old joined us in October 2013 from Bristol Rovers, where he had been involved in their first-team squad at the age of 17.”

“During his career with us, Matt made two first team appearances, both in the 2017/18 season. The first was in a 2-1 win over Norwich City in the EFL Cup, before the second came in a 0-0 home draw against Red Star Belgrade in the Europa League.”

“He enjoyed a number of loan spells, most recently a successful period with Plymouth Argyle for the 2018/19 season, during which time he was a regular for the Pilgrims in League One.”

“During the past two seasons, Matt has been a regular in the first team matchday squad. After last season’s restart and following Bernd Leno’s injury, he was on the bench for every Premier League and Emirates FA Cup match, collecting a winners’ medal as part of the matchday squad for the final win over Chelsea at Wembley in August.”

“From everyone at Arsenal, we would like to thank Matt for his contribution to the club and wish him all the best for the next chapter in his career with Hibernian.”

The deal is subject to the completion of regulatory processes.

The Gunners are set to announce the development after the teenager was spotted in training with the club’s Under-23 side.

The North London side sealed the £900,000 deal for the defender on deadline day of the summer transfer window.

The deal saw Matteo Guendouzi move the opposite direction on loan.

However, the transfer was not completed as the north London side ran out of time and have had to wait until January 2021 to complete the final paperwork with the transfer fee now negotiated down to £542,000.