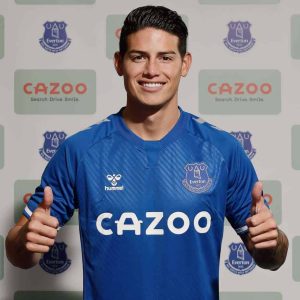 Everton have signed Colombia star midfielder James Rodriguez from Real Madrid in a deal worth £20m.
Rodriguez, 29, joins Everton on a two-year contract, with the option for a further season.

He signed for Real Madrid from Monaco in 2014 after winning the Golden Boot at the World Cup in Brazil that summer.

Speaking on his move Rodriguez said: “I am really, really happy to be at this great club, a club with so much history, and here with a manager who knows me really well.

“I’m looking forward to achieving great things here – and winning things, which is what everyone’s aim is.“I’ve come here to try to improve, to get better. I’ve also come here to help the team to win, to play good football – entertaining football.”

Rodriguez, who was entering the last year of his contract with the Spanish champions, featured 14 times for Zinedine Zidane’s side last season.

Here is Everton’s series of tweets about James Rodriguez signing

| "If you wanted to stand up the maxim about opposites attracting, then the mutual admiration between James Rodriguez and Carlos Valderrama would do the job nicely."

Two @FCFSeleccionCol icons with a world of respect for one another.

| Iconic landmarks across three continents and a ‘blue wave’ of media and digital activation.

The numbers behind #AlóJames and our growing profile in the US and Latin America.