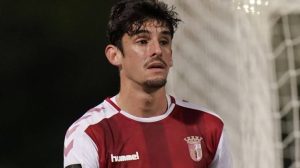 La Liga champions, Barcelona have reached an agreement with S.C. Braga, to sign Francisco Trincao, in a deal worth around €30million.

According to ESPN, the 20-year-old will move to the Camp Nou in the summer.

As part of the deal between Barcelona and S.C. Braga, Abel Ruiz will join the Portuguese side on loan before making the deal permanent at the end of the season.

Trincao who came through the youth academy at Braga and made his first-team debut at the end of 2018.

Barcelona is currently in need of an attacker following the injury of Luis Suarez which has left him out for four months.

The club manager, Quique Setien is left with four forwards, Lionel Messi, Antoine Griezmann, Ansu Fati and Ousmane Dembele, who will return to training from a hamstring injury this week.