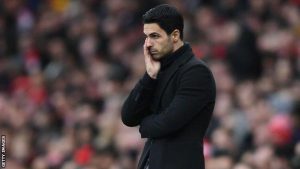 The Manager of Arsenal, Mikel Arteta, on Thursday, disclosed that the aim of the club during the January transfer window is to reduce the squad.

The North London side during the summer transfer window was able to offload Emiliano Martinez and Henrikh Mkhitaryan while Matteo Guendouzi and Lucas Torreira departed on loan.

The club, however, had difficulty in offloading Mesut Ozil, Shkodran Mustafi and Sead Kolasinac who have barely featured in the Premier League this season.

The Gunners have been linked with a loan move for Real Madrid playmaker, Isco, technical director, Edu, has to do away with some players in the club.

“There are some players that are going to go on loan and going to leave and that is the priority at the moment,” Arteta said ahead of Saturday’s trip to West Brom.

“We cannot sustain the numbers that we have in certain positions and we are looking to do that, and then we will see if we have the right opportunity in the positions where we need some more help.”

There are claims that there is a rift between the club’s players over the return of Germany international Mesut Ozil to the club squad in January.