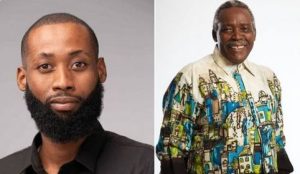 Tochi, one of the housemates of the ongoing Big Brother Naija season five has been praised by Nigerians for his acting skills.

Naija News reports that the BBNaija Housemate played one of the lead roles in the drama presentation for the Housemates’ weekly wager on Thursday.

Pleased with his acting prowess during the stage play, Nigerians took to the micro-blogging site, Twitter to praise Tochi, describing him as the new Olu Jacobs, a legendary Nollywood actor.

Can I say comfortably we have a new Olu Jacobs in Tochi's body… Man was awesome with his delivery.#BBNaija #bbnaijalockdown2020pic.twitter.com/8G6UoVKOzy

They are Natural born actors

Tochi is the upcoming Olu Jacobs.. I don’t want to say Low budget cos dude is good no cap. #bbnaijalockdown2020 pic.twitter.com/ZIZklgAV8V

Tochi is a Goat

our new olu jacobs no

I just hope Nollywood is jotting names down

Tochi and Olu Jacobs voice are the same #bbnaijalockdown2020 pic.twitter.com/ot3lLRJTUg

Biggie: HMs we need to find the next Olu Jacobs.

Nigerians: That's not possible. There's only one Olu Jacobs.

The way he shakes his nose and voice when he is angry.

Biggie, I take God beg you, grant them their wager.

Tochi is Olu Jacobs in the making.
He took me so unawares
Very Impressive scripting and overall acting like for real#BBNaija