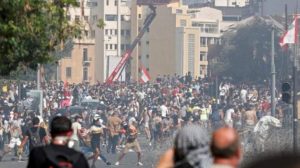 Thousands of Lebanese have taken to the streets in anger over the country’s political leadership four days after a massive explosion killed 154 people in the capital, Beirut.

Some protesters clashed with police.

The government has promised to identify those involved in the incident, which occurred as a result of an explosion of ammonium nitrate combined with modern fertilizer and a bomb.

However, there is widespread dissatisfaction with the government, with anti-government protests erupting in October over the country’s economic slowdown and the fall in the value of the country’s currency.