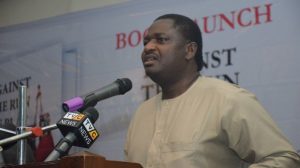 Femi Adesina, special adviser to President Muhammadu Buhari on media and publicity has alleged that some Nigerians involved in recent cases of looting experienced in some cities across the country didn’t do it because they were angry or hungry.

He alleged that they were simply taking advantage of the collapse of law and order caused by the #EndSARS protests.

This, he stated on Thursday, 29th October when he appeared on Channels Television’s Sunrise Daily programme where he declared that poverty has nothing to do with the invasion of COVID-19 palliatives warehouses.

The presidential spokesperson further stated that those who believe the shooting on peaceful #EndSARS protesters by security operatives at the Lekki toll gate plaza prompted the cases of vandalism and looting experienced are falling for the narrative by Amnesty International who he alleged shouldn’t know more than the government on such matters.

“Therefore, it was corollary to the mere anarchic situation that came on the country because of the protests. If you didn’t have people burning police stations, killing policemen, burning private and public property, you wouldn’t have this spate of looting.

“So, I don’t agree that it is all about poverty. Yes, in any country, you will have at any given time, you will have people who are poor, who are hungry and that is one of the reasons why you have government is to ensure that the number of poor and hungry people is reduced.”

These people you see looting are not necessarily hungry…they are taking advantage of the collapse of law and order.

-Femi Adesina on looting during the #EndSARS aftermath looting#SunriseDaily pic.twitter.com/yZnqXBjM9j