The LIMA Award winners are just some of the most incredible gospel artists that have taken to the stage and given us the show of our lives. The gospel music extravaganza in the ‘Year of Light’ featured leading the leading luminaries from the fold of Reverend Dr. Chris Oyakhilome. He was welcomed to the stage as   “the champion of champions” in recognition of the fact he has assembled the best gospel music artists on the Good Gospel Playlist who made last night’s show ‘hotter than fire’.

Talented creative ministers who know how to spread the Gospel.

It is about putting the songs together for distribution. The raw talents of these superstars of the gospel have been given to the world by Pastor Chris Oyakhilome. Gospel music fans download the sound, but they also love the video interpretation of their favourite tracks. ‘Music Video of the Year’ went to Samsong for ‘E Dey Work’. This hi-energy track was one of the tracks that kicked off the evening and got everyone on their feet. 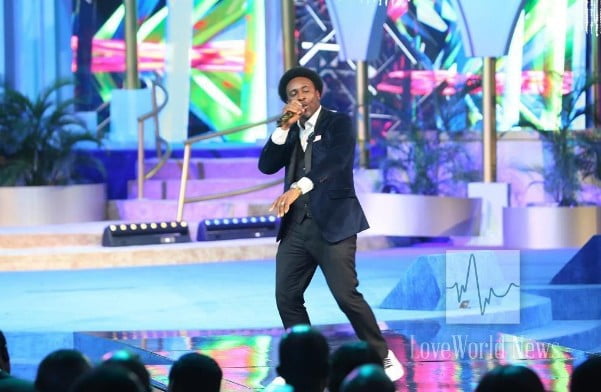 What can anyone say about the sublime brilliance of the ‘Artiste of the Year’, Testimony Jaga? Pastor Chris said that he “just can’t get enough “of his music. His ministry took Pastor Chris’s message to a whole new level as he wins souls with his ‘Gospel Street Movement’. In a poignant exchange Pastor Chris praised him for the prayer partners he has gathered. He also was granted the ‘Hit Song of the Year’ (Proto-Stars)’ prize for ‘Gone for Life.’

These artists clearly love and appreciate each other’s music. The ‘Collaboration of the Year’ went to CSO and Jeanine for ‘Higher Life’. Jeanine wanted to tell the world about the ‘winning of souls as it gives meaning to the work we do. CSO is about to go through the stratosphere. She is working and sharing her musicality with many of the LMAM artists. Her performance with Agent Snypa had the cameras of the world following her every move.

The ‘Best Female Vocalist’ was given to Pastor Ruthney and the ‘Best Male Vocalist’ was Eben. Eben was overwhelmed and surprised that he won the hotly contested award. Pastor Chris Oyakhilome said it was something about his voice that held the crowd like when he performed in Ghana. The humble minister responded that at ‘LoveWorld gospel stars just start worshipping. Everything I reach is because of the investment you made in me”. Pastor Chris notices the quality of the performers. Those who have won the ‘Best New Act’ go on to achieve greatness and so we are looking forward to seeing what Password will accomplish in the name of Rev Dr. Chris Oyakhilome.

“Are we taking over?” asked Pastor Chris Oyakhilome

If ‘what you wrote in your bedroom is now being sung all over the world’ then the awards for songwriters have a place in the heart of Pastor Chris Oyakhilome. ‘Song Writer of the Year (ProtoStar)’ was Rita Soul. She acknowledged that Jesus has been working in her to produce her songs. The ‘Song Writer of The Year’ in the All-Star category went to UK Band. The emotions of the night overwhelmed these multi-award-winning gospel stars. They declared that all their songs are for the ministry and they had been waiting for this moment for all their lives. They also bagged the prize for ‘Worship Song of the Year’. Furthermore, they were named ‘Music Band and Team of The Year’. 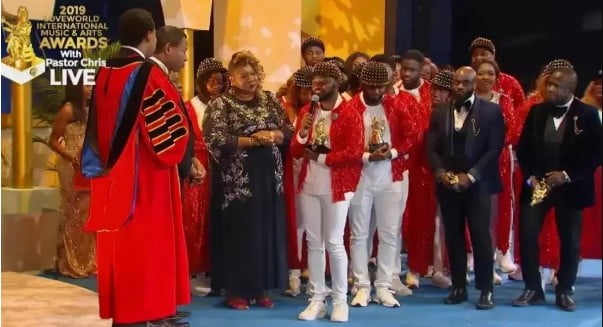 In this, the Year of Light’ the ’Theme Song of the Year’ was ‘Light’ by the very talented Pastor Saki. Pastor Chris has collated so many artists that work to further his message of salvation according to the gospel.  ‘Hit Song of the Year (All-Stars)’ was awarded for ‘Joy Overflow’ by Joe Praize. When thanking Pastor Chris, he fell to his knees and tears of joy filled his eyes. Pastor Chris’s sensitivity to the needs of his artists is touching. He recognized the profundity of award for Joe Praize.

Of the ‘Best Songs of 2019’there was one zenith.  The big one was picked from the best song category and won the top prize of the evening was ‘Overflow’ by the illustrious songbird Sinach. She thanked Pastor Chris Oyakhilome for believing in her and building her confidence as a singer and songwriter. She went on to say ‘we see your big heart. Thank you for giving me a home, giving all of us home. We are so grateful that you are the prophet of our lives and the Man of God. Thank you, Pastor.”

Pastor Chris said to his artists “You can do something that lasts, something that Jesus would be proud”. Our Man of God is clearly proud of the hottest global stars in the world who are part of his gospel playlist.