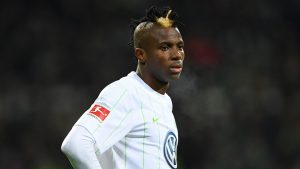 This was confirmed on Friday evening in a Twitter statement by his Italian club who noted the test conducted on the player upon his return from Lagos, Nigeria returned positive.

Osimhen was said to have visited Nigeria for the yuletide celebration and only returned to his club on Thursday.

According to a report monitored by Naija News on goal, the player was yet to mix with other teammates in Italy before the positive result was confirmed and he is now in isolation.

The statement from Napoli reads: “Napoli report that footballer Victor Osimhen tested positive for the molecular naso-pharyngeum swab on his return from abroad yesterday afternoon. The player is asymptomatic and has not met the team group.”

Osimhen had completed a mega-money move in August 2020 from Lille in the French top flight to Italian giants, Napoli and two goals from eight appearances to his name in the Italian Serie A.

His game time in Italy had been restricted due to an injury he sustained in November 2020 while n international duty for Nigeria in an Africa Cup of Nations qualifying fixture against Sierra Leone.

This has made him so far to miss games against AC Milan, Rijeka, AS Roma, AZ Alkmaar, Crotone, Real Sociedad, Sampdoria, Inter Milan, Lazio and Torino.

Meanwhile, Arsenal defender Sead Kolasinac has agreed to join Bundesliga side Schalke on loan for the remainder of the 2020/2021 season.

Naija News reports that this was made known in a statement on Thursday on the Gunners website Arsenal.com.

The Bosnia & Herzegovina international will be returning to the club he joined as a youth player and spent five years in their first team before signing for the Gunners in June 2017.