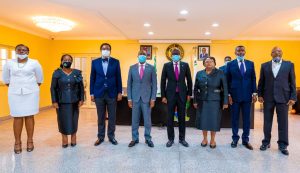 The Governor of Lagos State, Babajide Sanwo-Olu once again on Monday, 19th October, appealed to #EndSARS protesters to sheath their swords.

The Governor appealed to the protesters to end the nationwide protests while the government addresses their demands.

Sanwo-Olu made the call in a statement after he inaugurated the Judicial Panel of Inquiry on SARS brutality and Human Rights violations in the state.

Sanwo-Olu noted that the State has set up a N200m fund for compensation of individuals and families affected by SARS and other forms of Police brutality while officers found fingered will be tried and if found guilty, will face punishments ranging from demotions to outright dismissal.

While asking for time to meet all their demands, the Governor assured protesters that he is on their side and would relent until justice is served.

He wrote: “As we move to end police brutality, by virtue of Section 5 of Tribunals of Inquiry Law, Laws of Lagos State, 2015, I inaugurated an 8-man Judicial Panel of Inquiry and Restitution which will receive and investigate complaints of police brutality in Lagos.”

“The panel will in the next 24 hours be joined by 2 youth representatives and a member of the National Human Rights Commission as we look to provide restitution while following due process.”

“In Lagos, beyond setting up this panel which we hope will serve as a representation of our broader interests, we have established a N200 million fund for compensation to families and individuals who have been victimized by officers of the disbanded SARS.”

“We have also started engaging with protesters and all sides affected in all this.”

“We have witnessed the protests of our youth against police brutality. The pain of this generation has been felt in various parts of our state and country, as well as in the diaspora, all speaking with one voice against the unbridled violation of their rights and lives.”

“I am on the side of the young people out there. I understand your pain and I know your concerns are legitimate.”

“I must reiterate that while we were able to immediately acquiesce to some of your demands, some will require time: we ask you to bear with us as we work on them.”

“I will like to renew my appeal to you to suspend the protests and create an atmosphere for the resolution of all pending demands.”

The statement also revealed how the panel can be contacted so those with grievances can register their case.

“I encourage everyone brutalized by the disbanded SARS including the families of those who have died to present their cases before this Panel.”

Do send your claims for inquiry and restitution to: