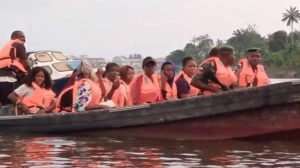 Six Nigerian policemen have been confirmed dead after their boat capsized in Ijaw South Local Government Area of ​​Bayelsa State.

The police officers were travelling ahead of the by-elections for the state assembly, which was held on Saturday in the state’s three senatorial constituencies.

State police spokesperson, Asinim Butswat confirmed the deaths to Channels TV on Sunday, saying the bodies of six policemen had been found.

There were 11 policemen in the boat at the time of the crash.

Zamfara, Bauchi, Cross River, Plateau, Lagos and Imo states were among the states where the elections were held.

Naija News reported earlier today that two ad-hoc staff of INEC have been declared missing in Zamfara state and their whereabouts were still unknown at the time of filing in this report.